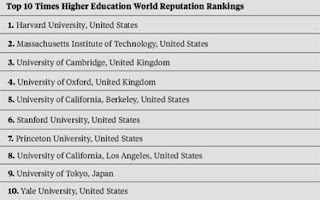 Malaysian universities did not make the cut.

The reputation ranking, a subsidiary of the World University Rankings, is based on the largest worldwide invitation-only survey of senior academic opinion.

It provides the only global index based purely on the power of university brands.

THE rankings editor Phil Baty says: "A university's reputation is subjective, but it matters deeply in today's highly competitive global marketplace, and it has serious real-world impact, helping to attract top student and academic talent, and encouraging industrial investment and benefactions.

"It is clear that no university, no matter how prestigious, can afford to be complacent in this fast-moving, information-rich global age. New forces in higher education are emerging, especially in the East Asian countries that are investing heavily in building world-class universities, so the traditional elite must be very careful. In the three years that the World Reputation Rankings have been running, we have clear evidence that the United States and the United Kingdom in particular are losing ground."

The poll, carried out by Ipsos MediaCT for Times Higher Education's rankings data supplier, Thomson Reuters, has attracted 48,000 responses from more than 150 countries in three years. This year's results are based on 16,639 responses from senior published academics.

While Japan still leads the Asian institutions pack with five schools on the list, it has lost some of its lustre.

University of Tokyo, which was at eighth spot last year, slipped down one notch to ninth position, while Kyoto University tumbled down three spots to No. 23. Osaka University remains in the 51-60 group but both Tohoku University and the Tokyo Institute of Technology have fallen from that band to the 61-70 cluster.

Baty says: "Japan's showing in the reputation ranking is much better than its record in the overall World University Rankings, based on 13 largely objective indicators, so there is a concern that the country has for too long been resting on its laurels and historical reputation. Strong action is needed to protect Japan from falling behind Asian rivals."

Though East Asian institutions are coming up, this year's ranking has again provided strong evidence of an elite group of six "super-brand" universities from the United States and United Kingdom that stand head and shoulders above the rest.

With the exception of Oxford, which has swapped places with Stanford this year, the top six's membership has remained consistent since the World Reputation Rankings' first edition in 2011, with the gap between it and the chasing pack widening each year.

While American schools continue to dominate the rankings, occupying 43 out of 100 spots. this position is slowly waning. It had 45 representatives in the top 100 in 2011 and 44 last year.

Outside the US, the UK has the most top 100 representatives (nine), but its overall showing has declined from 12 in 2011.

In terms of representation in the top 100, the US and the UK are followed by Australia, which has moved ahead of Japan and the Netherlands and now has six representatives (up from four last year).

Japan, the Netherlands and Germany each have five top 100 institutions, with Germany gaining a new entrant in 2013 (Freie Universität Berlin, which has entered the 91-100 band).

In total, 20 countries are represented in this year's reputation ranking.