Why We Need Sex Education

I found this article on the net... It was quite an old one but it's the best article that I can get hold of that gives clear explanation on the need of sex education in school..

I especially like the part .. not falling for the “if you love me, you will have sex with me”

here is the full article..

We all need to face facts that our young people are having their first sexual experience at an earlier age and have a shallow understanding of HIV. Not only that, we read of gang-rapes, unwanted teenage pregnancies, baby dumping and even stories of teenagers being totally unaware that they are pregnant until they deliver. Sex education is not only about the mechanics of sex but also learning how to respect our bodies and one another. It need not encourage promiscuity, but properly taught can encourage abstinence till marriage and not falling for the “if you love me, you will have sex with me” line. It is needed to encourage responsible sexual behavior and avoid unwanted pregnancies, STDs and HIV/AIDs. One last point — parents should not just leave it to the teachers but take it upon themselves (no matter how embarassing) to have frank discussions of responsible sexual behaviour with their kids. After all we want the best for our kids and want to protect them in every possible way, don’t we?

Don't get confused with moral and morale. Both have different meanings.

Morale means a state of individual psychological well-being based upon a sense of confidence and usefulness and purpose whereas Moral means:
# concerned with principles of right and wrong or conforming to standards of behavior and character based on those principles; "moral sense"
# the significance of a story or event; "the moral of the story is to love thy neighbor"
# psychological rather than physical or tangible in effect; "a moral victory"; "moral support"

The hot topic among teachers for this past week is High Performance School! To my surprise, my primary school that I attended (like millions years ago) made the list! Really proud of that school! Long live SK Zainab 2! yeayyy!

Here is a news excerpt...

Muhyiddin, who is also Education Minister, said of the 14 secondary schools, 10 were fully residential schools and the rest day schools.


"These schools were chosen from among schools that showed outstanding performance in the field of academia, co-curriculum and niche areas.


"The schools will be guided and monitored closely to ensure they continue to attain even higher levels of performance," he told reporters at his office here today.

At the same time, Muhyiddin stressed that SBTs were not elite schools which benefited only a limited number of students.

Instead, he said each school in the country had the same opportunity and a level playing field to be recognised as SBTs.

"Any school that meets the targets of excellence and criteria set (by the Education Ministry) will be recognised as a SBTs and get the same privileges," he said.

He said the rationale in having SBTs was to raise the quality of the best schools in the country to be world class, produce outstanding students and narrow the gap between schools within the system.

He said SBTs would be given additional autonomy to pursue innovation in school management and raise the productivity of students.


As for curriculum, he said, it would be flexible in terms of teaching and learning as well as syllabi for compulsory and elective subjects, conforming to public examinations and use of the national language as the medium of instruction or multiple languages.

Beside these, Muhyiddin said the schools concerned were also given leeway in fixing the minimum periods for subjects, extending schooling hours and allowing students to complete their studies a year earlier, just like the express promotion system that was introduced previously.


In terms of budget ownership, he said a lump sum grant would be channelled to the schools at the beginning of each year and that they would have the full flexibility to spend as needed and were exempted from the ministry's centralised procurement system.

"Every school has its own budget, but with this status, they will be given additional funds and they can use the money as needed," he said, adding that the grant might be less than RM1 million but had not been fixed yet as this depended on the size of the SBT.

He also said management of staff at these schools would be based on meritocracy and not seniority, besides flexibility given for the paying of overtime and performance incentives.

"There will also be flexibility to re-assign under performing staff and delegation of functions based on academic and non-academic reasons," he said.

Sometimes we got confused which one is to be used... is it anything or everything?

Here is an article I took from Mind Our English

You are right. The second sentence is better. This is because “anything” is usually used in a negative sentence, and both your sentences are negative.

“Everything” is better used in a positive sentence, e.g. “We should be wholehearted in everything we do.”

My new friend inspired me to come up with this entry, thanx Marni!

She suggested that I put lots of TESL stuff in this blog to generate more hits... waaahhh great idea.. I never thought of that before!

So, for start, let's have the meaning of T.E.S.L first;

TESL is an acronym for Teaching of English as a Second Language. 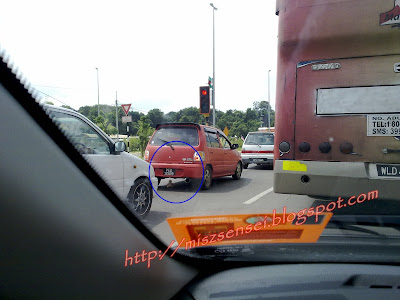 can you see the blue circle.. can you guess what is that in the circle... 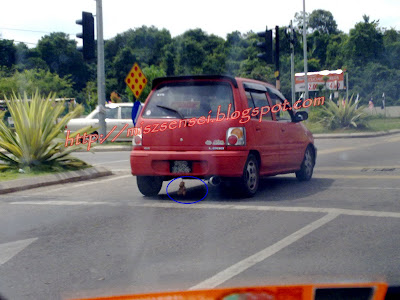 it's a little teddy bear hanging just below the plate number... it looks so cute!
Posted by misz_A at 8:00 AM No comments:

Well... c'est la vie... life must go on... though I have yet to receive any sort of compensations from the travel agency... this blog must go on right? hahaha...

special thanx to redmummy.com for this 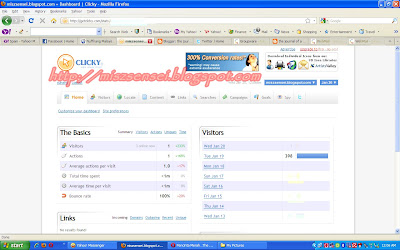 due to an entry in redmummy.com regarding the photo issue.. this blog received almost 400 hits!
Posted by misz_A at 8:00 AM No comments:

What Would You Do 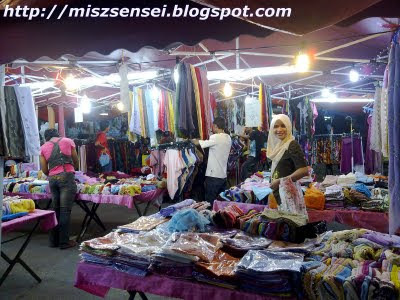 What would you do if the above photo ends up in this brochure... 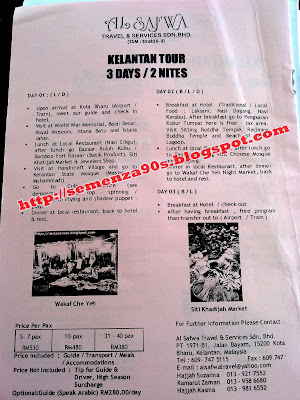 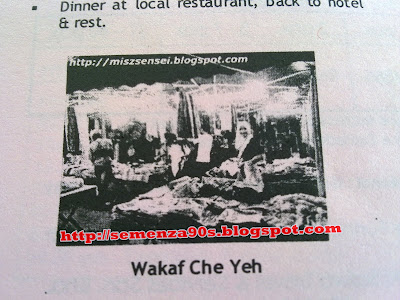 Please Don't Hate Me For Posting This...

Happy Monday morning people... I just love Mondays... full of possibilities for the week ahead... challenges and adventures to be experienced... 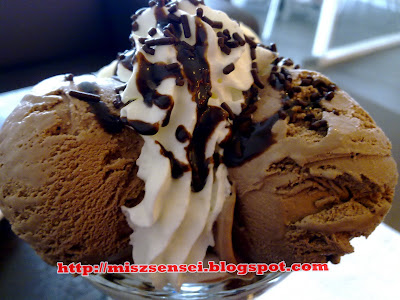 how about this for an early monday morning breakfast.... hahaa... 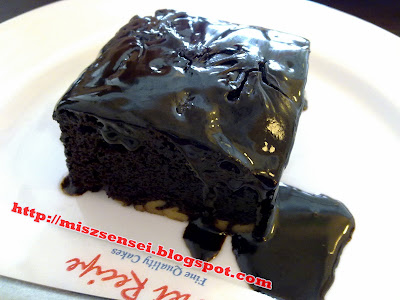 
happy working all... just be thankful that we have a job that can support us n our family...
Posted by misz_A at 7:54 AM 2 comments:

The Time Is Now

"The way to get things done is to stimulate competition. I do not mean in a sordid money-getting way, but in the desire to excel." Charles Schwab

to all of my students...

Weekend is just around the corner.. what is your plan for this weekend? 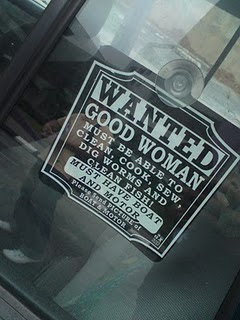 Trying to find a wife? Or a maid? or fishing partner? hehehehe
Posted by misz_A at 8:00 AM 1 comment: 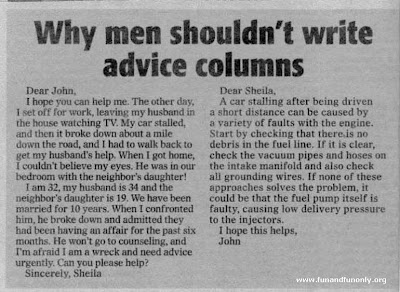 Latest Attraction At Our House 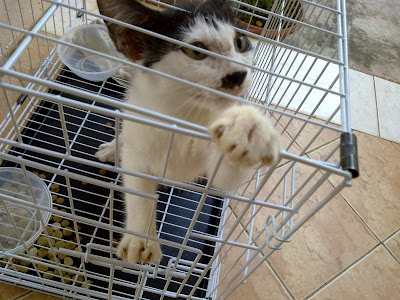 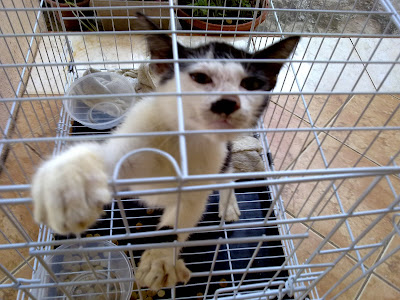 this is not the same Bubu that we had before.. we are baby sitting him just for a few days.. his mommy went to KL.. 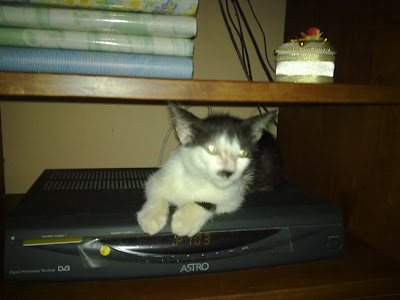 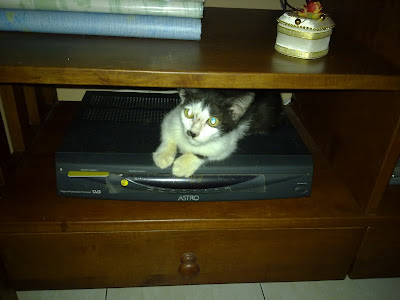 one of his favourite place.... trying to get our attention... 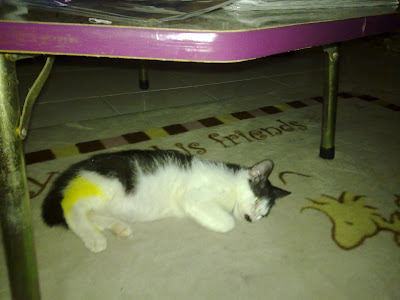 monkeying around... what is that yellow thingy? 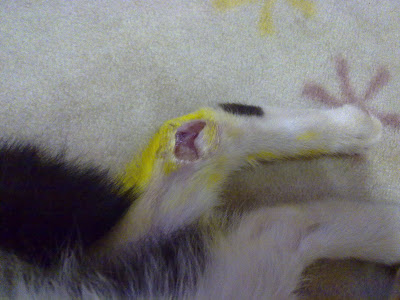 euwww! he got himself in a fight on the second day he was here... poor Bubu.. don't know how his mommy going to react... huhu..
Posted by misz_A at 7:59 AM No comments:

Farah Gets Lost At The Pasar Malam

I came across this book while reading The Star just now.

This is a good English book for children not only for the sake of improving one's English but also for the lesson that could be learned from the story.

i.e what to do when you get lost
how to get help from others

This kind of book is not only for children, I would recommend this type of books to those who wanted to improve their English no matter what age group you are in. Farah Gets Lost At The Pasar Malam

IN this book Farah accompanies her parents to the pasar malam. Her mother asks the little girl to stay close but Farah is distracted by some trinkets and wanders off. Presently, she realises that her parents are nowhere to be seen. Farah panics but luckily, a kind stranger turns up to help her. Farah Learns The Joy Of Sharing continues this new series that aims to teach “life lessons” to children. The stories end in lists, instructing children how to behave.
Posted by misz_A at 7:44 AM 1 comment: 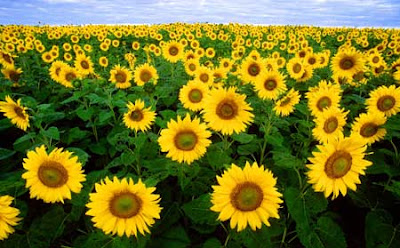 A bright new day
Hoping for a brighter year ahead